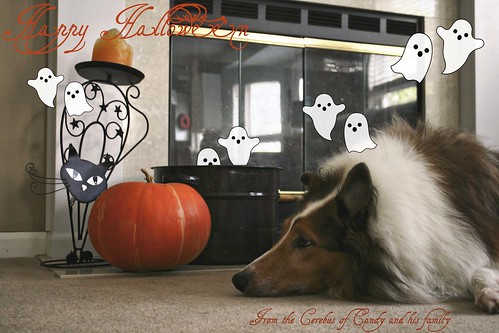 Granted, Ben’s not much for posing, particularly when ghosts are involved.

There was another post planned, but it is Halloween, of course, and it seemed like a little more fun to just share our photos with you. Here in our town, trick-or-treating was last night due to a big football game tonight. Yes, that’s really weird…but this is central Ohio, where football reigns supreme. I remember Halloween being rescheduled a few times when we lived in West Virginia, too, so it does not seem as bizarre 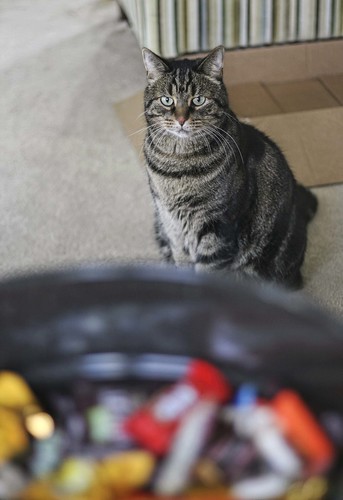 Buckley is wishing we’d spent money on catnip & toys instead of candy.

to me as it did to some folks on Twitter last night, who thought the tiny Supermans and princesses were a night early and that we’re just a super nice couple for giving candy out a night early. Regardless—it is sleeting outside my window as I type. That rescheduling has turned out to be fortuitous.

Many of my online friends and acquaintances truly adore Halloween, so it is really fun for me to watch all of you get so excited about it. My parents were hyper-fundamentalist when I was young, so I do not remember trick-or-treating, as I wasn’t allowed to do so past the age of maybe four or five. But my affection for the black cat-and-bat holiday is genuine; everyone likes to dress up, and be silly, and get free candy, yes?

As an adult, of course I’m far too old to go trick-or-treating, but 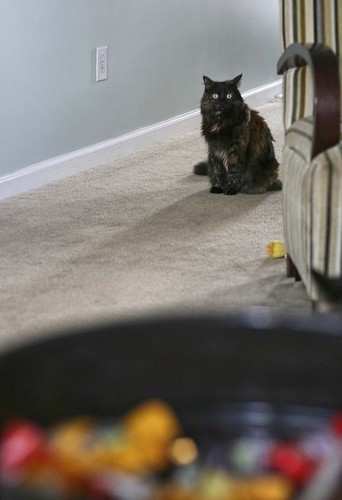 Lucy can’t believe we’re about to give away 300 pieces of candy.

have great fun decorating the house and then seeing all of the excited little ones in their marvellous costumes sweep up to our porch for candy. It’s so much fun! I really look forward to it, perhaps nearly as much as the crumb-crunchers do.

Of course, I don’t ever really “need” to “dress up”; as a “vintage girl”, my everyday look suffices pretty well unless I find myself with the time and inclination to come up with something more interesting. I do usually don something fun, though, this year choosing to wear a frock I made from fabric with tiny little critters on it. It is a cellphone photograph, but you can probably just see tiny alligators, tigers, giraffes, and hippos beneath my warm sweater! Ben is very carefully watching the next batch of kids heading up the sidewalk.

Now, for many years, Benedict has been living proof of the collie’s natural goodness and tolerance, his dignity being insulted with costumes. 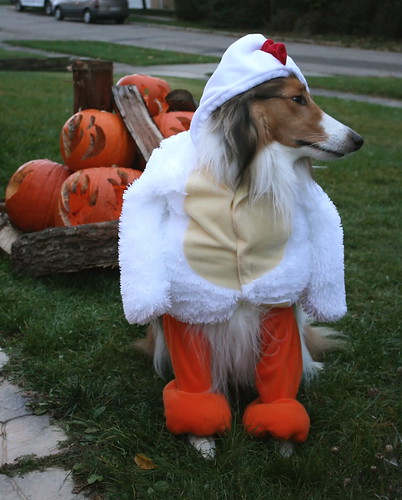 The first year: A CHICKEN?! *sigh*

Dressing him up was not ever my idea—but Zach returned home with costumes for the whole herd one year, and a dubious tradition was born. 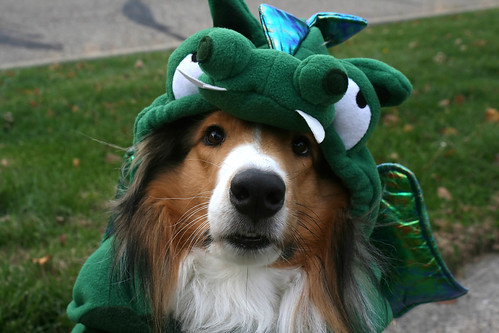 I was once roped into making a “back end” for a costume. 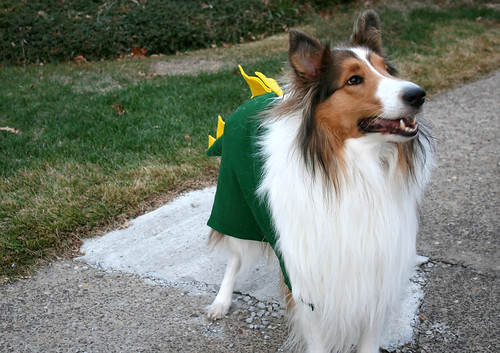 I don’t think he minded the dragon costume a whole lot, really.

And happily, some years for Ben have been less humiliating than others. 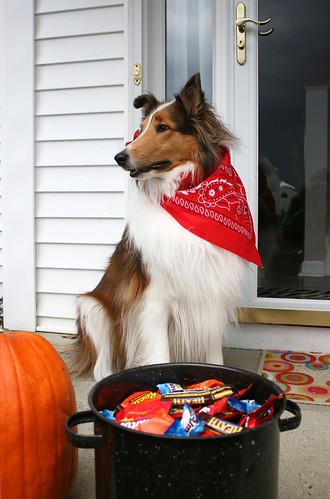 But most of them have been an affront to his natural dignity. 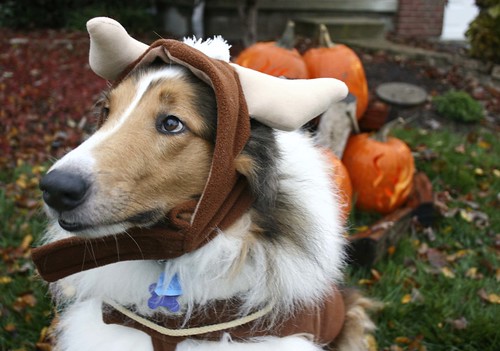 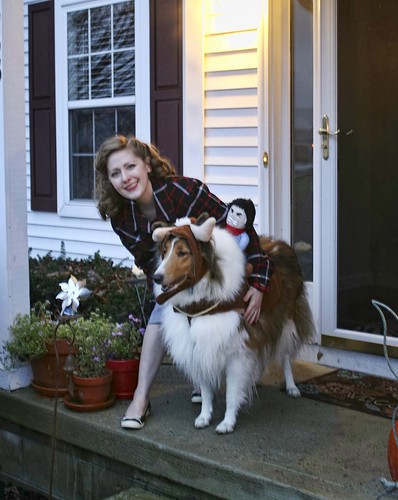 Bucking Bronco in the rain, to boot! (This was a SUPER cold year, I had earmuffs on by about 6:15.)

Such a good boy! Though I really don’t like seeing all of that grey on his muzzle…

God bless Ben! There was no costume for him this year, much to his delight, unless you count “naturally very handsome” as a costume.  Sitting between my husband and I on the porch, he simply continued to be the perfect ambassador for all collie-dom. He was petted and ooo-d and awwww-d over by roughly 167 wonderfully dressed kids of all ages, and even shook a few hands, all while guarding the bucket of candy. Quite a few kids told their parents, “I want a collie!” which I think is a good thing—collies are superb with children. He’s such a good dog, and I think last night was his favourite Halloween ever, if collies can ponder such things. He got enough attention to tide him over until at least after “House on Haunted Hill” was over on TCM.

So that’s our Halloween already, which is a bit sad, but there is next year to look forward to! You all have a wonderful Halloween weekend, and try to remember to eat at least one bite of veggie  for every 16.2 pieces of candy.