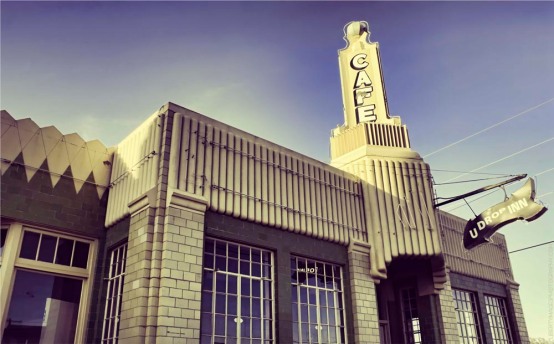 Working on a little project for the blog over the weekend left the undercurrent of wanderlust I regularly feel panging even more loudly in my mind, but I am of course a bit homebound. Still, I thought we’d zip back across Route 66 to take another brief peek at the famed U-Drop-Inn of Shamrock. Really, I could look at this place all day long, and we certainly spent a great deal of time there during our visit! I’ve yet to see the neon illuminated, but am sure to one of these days.

Anyone else dealing with a raging case of cabin fever?

Have a beautiful Monday…even if you’d rather be on the road, too!

This peek at Tucumcari, New Mexico’s Palomino Motel ought to do the trick! And yes, that’s our fearless road-warrior-ing vehicle’s nose in the frame. It’s just not right to make your vehicle drive you halfway across the country and not include it (or portions of it) in a few photos. For a better idea of how she looked at this point, however, and a wordless explanation of why you shouldn’t bother washing your car on a road trip, take a look beneath the cut.  END_OF_DOCUMENT_TOKEN_TO_BE_REPLACED

Thanks to Ron at Route 66 News for posting this short but entertaining little video about the world-famous Blue Whale of Catoosa. I have to say: my favourite part of it is the sunshine! It was quite drizzly during our visit, though believe me, NOTHING can take joy away from the experience of visiting the Blue Whale. I kid you not. It’s such fun!

I can see that a great deal of work has been done since my visit two years ago. The segment was probably done, as Ron suggested, in anticipation of last night’s Blue Tie Affair, a “quirky blue tie formal” event which raises money to save and maintain Ol’ Blue. We couldn’t make it this year, but maybe next—I have the perfect vintage blue tiki dress for the event, and am sure I can find shoes to match! Perhaps I can even ‘kidnap’ some of my friends from Nashville on the way to Oklahoma so we can all go together…

I will say that the reporter’s comment about people travelling to the US “just” to travel 66 is a bit irksome. Thousands travel the Mother Road every year; it’s a dream of many thousands more, and quite do-able. Then again, we often take for granted what we have in our own backyard. Still, the “Route 66 does not exist anymore” myth is, unfortunately, very much alive and well. What a shame!

By the way, Ol’ Blue is always sharing interesting things on Twitter. The whale can be quite chatty, too!

Stevie Y, the world’s only cephalopod to travel Route 66, gets a good look at Ol’ Blue.

After returning from a recent jaunt along the Mother Road, Virginians James & Bernice Shively decided to create a little bit of Route 66 in their own backyard. An article in The Franklin News Post describes Mrs. Shively as having been “captivated” by a 1930s gas station in Texas. I’m guessing the one that so captured their imaginations was the very one you see in my photograph above—the first Phillips 66 built in Texas.

Back on their property in Ferrum, they had a building that they both considered to be “somewhat of an eyesore”, and Bernice thought it would be a perfect project for conversion into a replica gas station, modeled on the one they had seen in Texas.

A neighbor helped the retired couple turn the building into a darling replica of an early Phillips station, which you can see here (there’s no information about the photographer at all, and as you can imagine, I’m not big on stealing photography—that’s why you’re seeing my shots of the McLean station instead)—complete with three pumps and a large, swinging Phillips 66 sign.

“The original owner of the sign would not sell it but insisted on giving it to me,” Shively said.

The couple has filled the interior of their newly-built 1930s filling station replica with era-appropriate gas station memorabilia, which of course puts any Route 66 lover in mind of the beloved Gary Turner and his Gay Parita in Missouri. The Shiveleys acquired many of the goodies during their travels, and apparently, one of the gas pumps was picked up in North Dakota. No doubt it’s enjoying the balmier climate of southwestern Virginia (I know I would).

Easily visible from Route 40, the Shivleys’ station is already drawing in quite a few visitors. The appeal of the Shivelys’ home-made bit of Route 66 will certainly increase when they park the ’31 Ford Model A pickup they’re restoring out front. END_OF_DOCUMENT_TOKEN_TO_BE_REPLACED

This perfectly restored Phillips 66 station stands in Red Oak II, Missouri—a town transported and re-built not too far from the Mother Road. Gary at Gay Parita insisted we stop, and I’m so glad we did; it’s well worth the short detour. One of these days I’ll have to write a post specifically about Red Oak II; I don’t use the word “magical” very often, but it applies to Lowell Davis’ rebuilt boyhood hometown.

END_OF_DOCUMENT_TOKEN_TO_BE_REPLACED

This came through on my Twitter feed today via the Motels Of Route 66 project (hmmm, perhaps I should attempt to get myself crowd-funded, too!)—it’s rare stock footage of Route 66 from the 50s. About two minutes long, it’s a fun little jaunt to the past I hope you enjoy.

I caught this great old Holsum door advert in what is left of Spencer, Missouri on my first jaunt along Route 66. Spencer is a little west of Springfield, not far from Paris Springs; take old 66 to the Johnson Creek Bridge, and Spencer is right there off the curve of the Mother Road. Never a big place to begin with, the tiny agricultural settlement’s fortunes rose and fell with the success of the roads that went through it; founded in the late 1860s or early 1870s and at one point big enough to necessitate a church, it was nearly empty by 1912—until Route 66 came through.

A filling station and repairs garage (of course!), small market, and barbershop sprang up and no doubt did fine business…until Route 66 was bypassed by I-44. Spencer sank again into low economic straits,

and on a day we can’t pinpoint, the last person locked their door and walked away.

All that remained of Spencer was this stone building, the one that housed the shops and garage. Like many Mother Road towns bypassed by the interstate or even just left behind by a new alignment of 66, the little “townlet” decayed, and faced the possibility of disappearing entirely.

Luckily, buildings back then were built to last, and those of Spencer stuck around long enough to attract the eye of a Kansan couple. END_OF_DOCUMENT_TOKEN_TO_BE_REPLACED