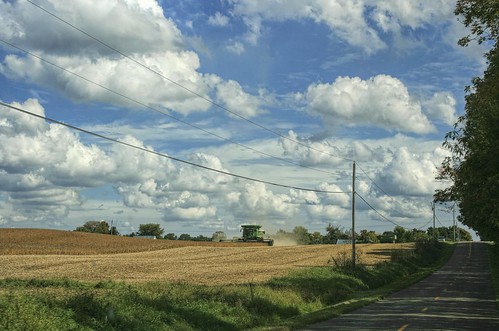 Timing is everything, as we all know. Zipping down one of Ohio’s many country roads, I spotted this “Frank” doing its work in the fields. There wasn’t even time to hop out of the car—but I’m still very happy with this shot! A fine stroke of luck. All the shot is missing is a kindly-looking middle-aged farmer, proudly surveying the activity on his farm (he’s probably the fellow driving the harvester). 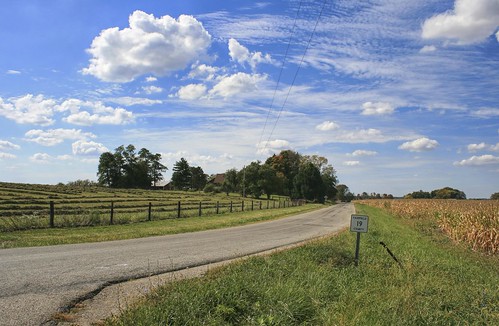 Also, random internet user tip….Have you been glaring angrily at your computer due to its not performing correctly? As in, you’re unable to post to Flickr, your blog, or even see letters on webpages?

Reinstall the browser. You’ll save yourself two full days of frustration and re-booting your computer thinking it is the one responsible for your problems.

Have a beautiful Monday, all!

Chillicothe, Ohio, between US 50 (Main Street) and the other main road—making this road a sort of Main Street No. 2

There’s a very good article in Collector’s Weekly about the recent resurgence of hand-painted signs. It’s bound to tickle the hearts of all sign aficionados as well as those who admire the skill involved in such work—mass production has not won out just yet! Moreover, what a wonderful field of work for those with an artistic spirit.

An EMBARRASSMENT of ghost sign riches on a single wall in Virden, Illinois! I am not sure how old the Sly Fox sign is, though it’s clearly of more recent vintage than the Wrigley’s and the millinery.

The article inspired me to post some of the best hand-painted “ghost signs” I’ve come across during my travels, including a few contemporary examples.

Another richly decorated wall of ghost signs, this in Weston, WV.

The above wall is one of the most richly-painted I’ve seen. My husband and I were on our way to visit friends in Nashville, taking old US-19 so as to better enjoy the ride. Though the weather was unseasonably cold and rain was pouring down to boot (see the raindrops on the lens?), my lack of proper attire didn’t stop me from taking quite a few quick snaps in the town of Weston, West Virginia. END_OF_DOCUMENT_TOKEN_TO_BE_REPLACED

This peek at Tucumcari, New Mexico’s Palomino Motel ought to do the trick! And yes, that’s our fearless road-warrior-ing vehicle’s nose in the frame. It’s just not right to make your vehicle drive you halfway across the country and not include it (or portions of it) in a few photos. For a better idea of how she looked at this point, however, and a wordless explanation of why you shouldn’t bother washing your car on a road trip, take a look beneath the cut.  END_OF_DOCUMENT_TOKEN_TO_BE_REPLACED

This perfectly restored Phillips 66 station stands in Red Oak II, Missouri—a town transported and re-built not too far from the Mother Road. Gary at Gay Parita insisted we stop, and I’m so glad we did; it’s well worth the short detour. One of these days I’ll have to write a post specifically about Red Oak II; I don’t use the word “magical” very often, but it applies to Lowell Davis’ rebuilt boyhood hometown.

END_OF_DOCUMENT_TOKEN_TO_BE_REPLACED

Via the always-informative Theatre Historical Society blog I learned about a new exhibit focusing on the great American drive-in theatre. Opening February 1 in the Chicago suburb of  Elmhurst, Illinois (maybe cruise along a bit of 66 while you are there?), “Movies in the Moonlight: The Life and Times of the American Drive-In Movie Theatre“ sounds like it might very well be worth the trip! It is even held in Elmhurst’s York Theatre, itself a gem of a place built in 1924. According to Kathy McLeister’s post,

Movies in the Moonlight: The Life and Times of the Drive-In Theatre  February 2013 – January 2014 2013 marks the 80th anniversary of the Drive-in theatre. Movies in the Moonlight traces the rise and fall of the Drive-in theatre from the first (opened June 6, 1933 in Camden, New Jersey), to the peak of their popularity in the late 1950s and early 1960s (with some 4,000 drive-ins across the United States), to their decline into a quasi-novelty status. The exhibit will explore their popularity, technology, and why they became (and continue to be) an American cultural icon.

As you can see, the exhibit runs ’til this time next year, so there are plenty of weekends to fill with a quick trip to Illinois. And if you’re making the trip…well, what else is there to see in Elmhurst (Route 66 in Chicago aside)? END_OF_DOCUMENT_TOKEN_TO_BE_REPLACED

Yesterday was the 79th anniversary of the invention of the drive-in movie theatre. This is a small and unimportant anniversary compared to the fact that June 6 is also the anniversary of D-Day (I spent much of my day thinking about those startlingly heroic men; my grandfather is a WWII vet), but I cannot shoot D-Day (and probably would not have wanted to even if a woman had been allowed near the scenes of battle); I can, and do, however, photograph old drive-in theatres when I find them. 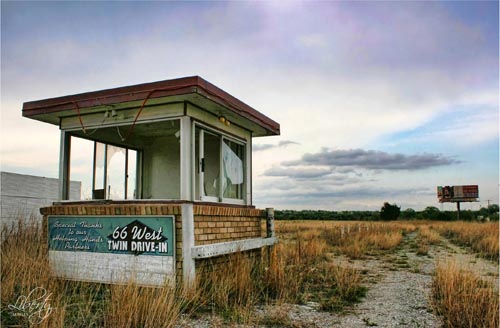 Of course, many of the remaining drive-in theatres look like Oklahoma’s 66 West Twin here. Technological and cultural changes haven’t been kind to the drive-in movie and its fans, have they?

It seems a little odd, really; the drive-in was created in part so that people could enjoy a movie in a more casual, relaxed setting than the downtown theatre. Our culture has indeed become more casual and relaxed—in the 40s and 50s, people wore their Sunday best when they went out to “see the show”, as my Grandma Sally always said. But the multiplex arose and captured our fancy, to say nothing of cable television offering movies on-demand or devices like Roku. Even so, if you want to GO see a movie but not fuss over it, it’s hard to beat the drive-in—especially if you have kids. I remember being dressed in my PJs to go see a drive-in movie more than once! Somehow, though, despite the bang for the family’s buck—drive-ins usually had a playground on-site for the crumb-crunchers—the venues fell out of favour.

Perhaps even more dangerously for the survival of the drive-in, though, the value of the real estate drive-ins sat upon became increasingly valuable. Drive-ins such as the Gratiot Drive-In, where I remember seeing movies at as just a tyke, were far too close to growing cities like Detroit, Saint Clair Shores, and Roseville to survive.

This grand 1948 drive in was built with no expense spared, and had a cascading waterfall on the back side of the screen facing Gratiot. The water fell into a tub at the foot of the tower—perfect for youngsters to play in on hot summer nights. Of course, pranksters couldn’t resist having a little fun, too—one Detroit resident remembers someone putting bubbles into the water. Can you imagine?

By the time I was visiting the Gratiot, the waterfall had long been stopped—Dad told me he thinks they stopped running it some time during the 60s. Of course, that beautiful, neon-bedecked Gratiot tower and Art Deco lettering remained the backdrop for decades of cruising up and down Gratiot. Sadly, in 1984, the drive-in was shut down and razed—razed, in fact, at the same time the Tigers were winning the World Series. END_OF_DOCUMENT_TOKEN_TO_BE_REPLACED