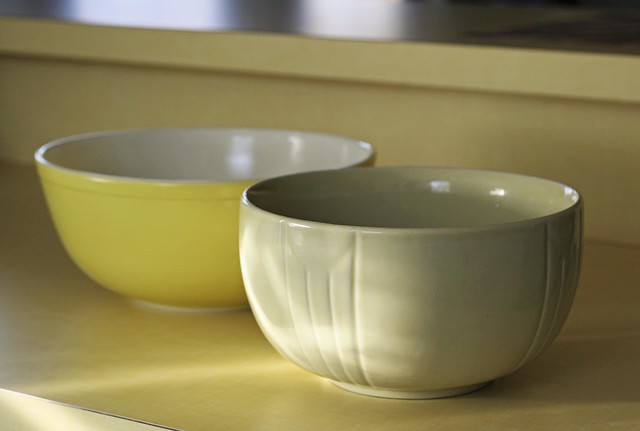 Both of these yellow bowls are family heirlooms, if something so simple can be an heirloom (to me, the answer is very much “yes”).

The sunny Pyrex bowl in back belonged to my paternal grandmother, who died before I graduated from high school. A month after my grandfather died, twenty years later after Grandma, just a few years ago now, Dad brought a box of things from their home to me, including Grandma’s Pyrex bowls. They’re actually a gift from my beloved Aunt Judy, who knows I, like herself and my grandmother (her mother, of course) and great-grandmother, love cooking and baking, and kindly wished me 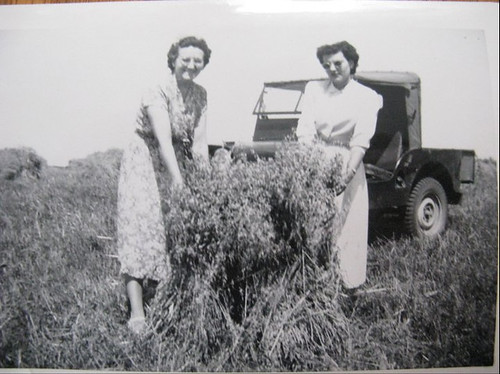 My paternal great-grandmother and grandmother, working on the family farm in Iowa, 1953.

Those who’ve known me for a while have surely heard me talk about my Grandma Sally and endured my tales of her simple but fantastically good all-American cooking and baking, and her well-used bowls gained an instant place of pride in my kitchen—not incidentally, beside the pale blue Fire-King given to me by the aforementioned great-grandmother.

The butter-yellow stoneware bowl in the foreground belonged to my maternal grandmother, who it seems I christened “Nannie” when a toddler still learning to talk. Her first name is my middle. She didn’t enjoy cooking and baking as quite as much as Grandma Sally (I’ve told you about the still semi-frozen Christmas turkey that finished cooking in portions via the microwave to the sound of chuckling and giggling, right?), but among other fine characteristics, she did appreciate lovely things, and filled her home with them; some were practical, like the bowl, but of course, as women are often wont to do, others were just there to grace the home with loveliness.

I don’t know where this simply pretty and very sturdy bowl came from, but it fit the home of my maternal grandparents well and I’m sure dished out all kinds of good food. It was given to me last summer, when my grandfather, preparing to sell the home they’d lived in for so long, suggested the family come pick up anything they’d like, and was also given an affectionate place of honour in my kitchen.

Monday, Nannie went home to be with the Lord.  END_OF_DOCUMENT_TOKEN_TO_BE_REPLACED

Rest in peace, Robin. Thank you for the laughs, and thank you for always choosing to cheer our troops.

“The hopes and prayers of liberty-loving people everywhere march with you. …I have full confidence in your courage, devotion to duty, and skill in battle. We will accept nothing less than full victory.”

There’s exciting news I’m happy to move to the back burner (I can self-promote any day) to honour these incredibly, unfathomably brave men. Earlier today I read a post noting that due to the conditions of the Normandy Invasion, we will never truly know how many men gave their lives in order to save Western civilization and, indeed, the remainder of the globe from the very real threat of Nazi domination under Adolph Hitler (that said, historians estimate over 110,000 men from both sides died in the battle). END_OF_DOCUMENT_TOKEN_TO_BE_REPLACED 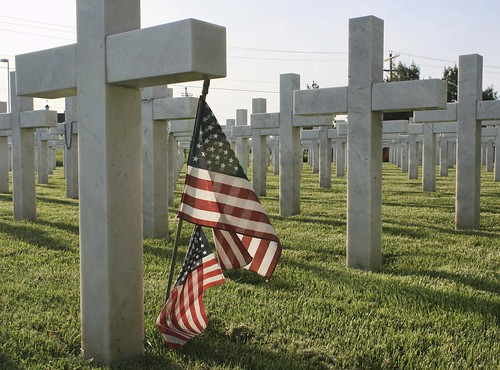 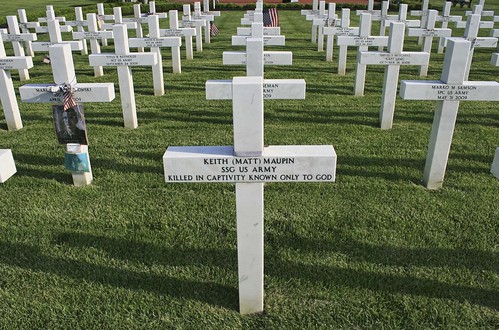 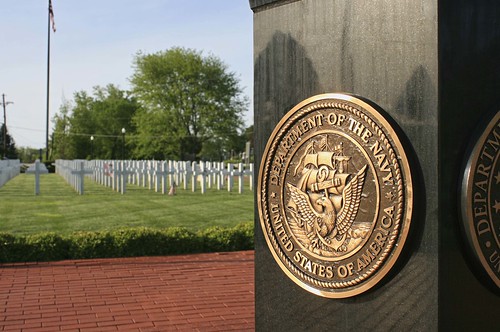 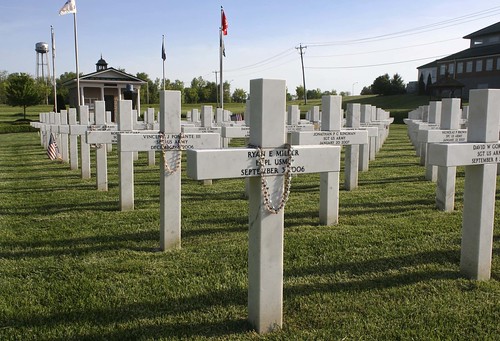 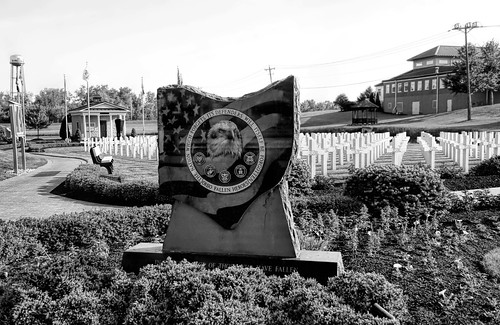 END_OF_DOCUMENT_TOKEN_TO_BE_REPLACED

Much has been said about Shirley Temple Black since yesterday—a pal of mine reminded me of her amazing poise, even as a tiny child—but really, the best I’ve read thus far regarding that marvellous lady is from Nitrate Diva. Pop over and read.

(To be honest, I remain surprised over my deeply felt reaction to her loss; I don’t feel as if my childhood is gone, but as if something dear has gone missing or, more precisely, has been misplaced. Perhaps Shirley’s work reminded us of that, draws us back to it, and that is why her passing affects so many of us so.)

Shirley Temple described her childhood as “bathed in love”. Shown with her beloved mother during the 30s.

To learn shortly after awakening this morning that Shirley Temple Black had passed away at the age of 85 was a bit of a shock. More surprising was the pang I felt; our remaining Golden Age stars are becoming fewer and fewer, older and older, and to learn of their passing is something we ought to expect. Yet learning Shirley Temple Black had taken a peaceful homegoing, surrounded by her family at her home, truly saddened me. Somehow, my surprise at the sadness makes it worse, but I doubt I’m alone in this.

Perhaps it was her vibrant cheerfulness, natural charm, and spiritedness that so endeared her to me, or the knowledge that she had

remained married to her husband for so very long, considering her roles as wife, mother, and grandmother to be the greatest and most important she ever had (a mindset that, sadly, has long been missing in Hollywood). It’s difficult to say, really—though I suppose that, in a way, Shirley was the original Miss America, who rose to prominence and popularity during a time when our nation greatly needed the sparkling joy she graced silver screens from sea to shining sea with. Is it any wonder quite a few felt a twinge to learn she had died?

Like so many, Shirley Temple’s films were among those I cut my teeth on as a child. Best-remembered in my case are The Little Princess (gobsmackingly, this is now in the public domain) and Heidi; the former I’d watch over and over, borderline fearing, every viewing, that Captain Crewe would not recognize dauntlessly hopeful little Sara in time. And of course there are her musicals—her dancing with the great Bill “Bojangles” Robinson, with whom Black remained friends until his passing, is just as delightful today as it was in the 1930s (their dancing is so smile-inducing I’ve closed this post with it; Robinson did the choreography. As someone who can waltz and that’s it, I’ve always loved watching the tap dancers of the 30s and 40s!).

It has only been over the past several years that I’ve been able to see films she made later in her career (Fort Apache I no doubt saw as a child, but simply did not recognize a nearly grown-up Shirley!), and I will confess to loving several of those I’ve seen—1944’s Since You Went Away with Claudette Colbert, Joseph Cotten, Monty Wooley, Hattie McDaniel, and Jennifer Jones (what a cast, right?!) and I’ll Be Seeing You, another film with Joseph Cotten also starring Ginger Rogers and Spring Byington, being especial cases. END_OF_DOCUMENT_TOKEN_TO_BE_REPLACED

What a difficult week for classic movie fans: Not only did Eleanor Parker die earlier this week, but today the news broke that Peter O’Toole passed away yesterday and Joan Fontaine today.

Both were superbly talented actors—that Fontaine was such is no surprise, considering the measure of her sister’s gift. Skill and beauty ran in that family. O’Toole, too, was a marvellously gifted actor—though I must confess that his performances in My Favorite Year and Lion In Winter surpass that of his more famous Lawrence of Arabia (sacrilege, I know).

Joan Fontaine was 96. Peter O’Toole was 81. May they both rest in peace—and how blessed we are to have their work to enjoy.