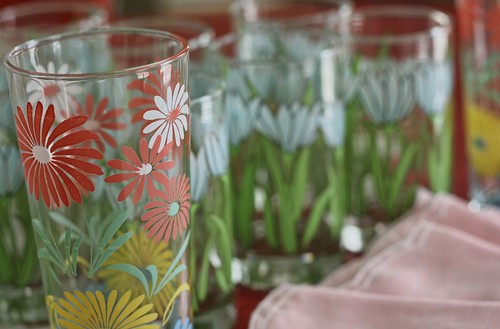 The Buy-Way was actually two weekends ago tomorrow, but as you know, my computer has been a bit temperamental (it’s only four years old, meaning I don’t much feel like springing for a new one; we’ll see who can be more stubborn) and other projects kept me from getting these pictures of my goodies to you as soon as possible. We also had several straight days of dark, rainy skies right after the Buy-Way ended, which put a cramp in my shooting said finds.

But like any hunter, I’m proud of the prey dragged home and wish to show off my bargaining prowess—and everybody seems to enjoy looking at vintage goodies…especially as we enter the last few weekends of summer yard-sale-ing!

The glasses above are one of my favourite finds. They came in a box together with a set of four (standard wreath-and-holly) Christmas glasses for a mere $2! The pretty pink linen napkins were from another yard sale.

I’m a borderline sucker for anything with a scalloped edge.

I’d say between the glasses and the napkins, I’m perfectly set for an iced-tea party! Here, take a better look at the glasses: 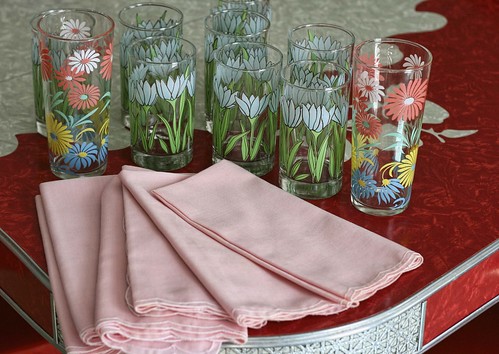 Taken while standing on a wobbly old diner chair that really, really just needs new feet to even things out.

Cucumber sandwich or miniature cheesecake, dear-hearts? Perhaps we can have that iced-tea party in the garden, where some of my other finds will be tucked in amongst the flora. This adorable green rabbit, for instance: 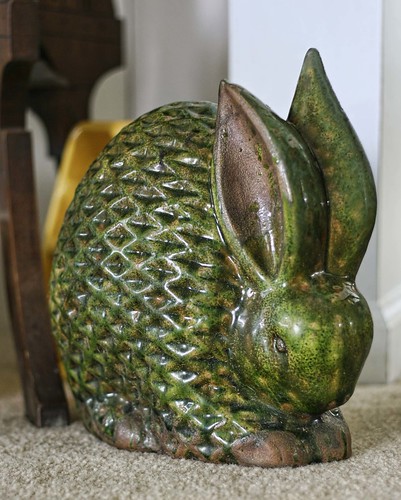 At $10 (okay…$9.95), he was my most expensive purchase, but worth it if you ask me. For once I didn’t bargain with the seller, either, as someone was eyeballing him even as he rested in my arms. Unfortunately he has no marks of any kind, so I don’t know a thing about him—perhaps he’s from a local place? No matter. Still more proof of the power of cute. 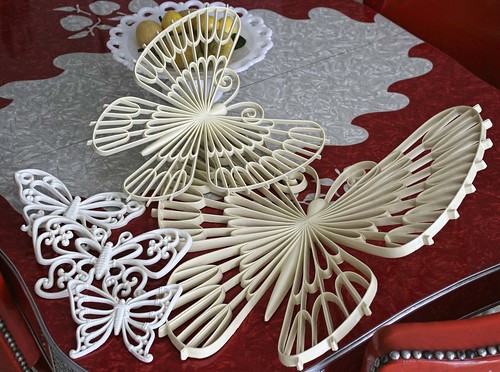 These old plastic butterflies were a steal (to say nothing of the fact that they’re all dated and made in the USA). Before embarking upon our Buy-Way journey, I’d seen a pin where a woman had taken some of these, spray-painted them, and stuck them into her garden, so that’s what I’ll be doing for next year. The larger ones can hang on the side of the shed; the smaller ones I’ll stick to rebar, paint—maybe, as white is a good thing in any garden—and set to “flying” through the garden. 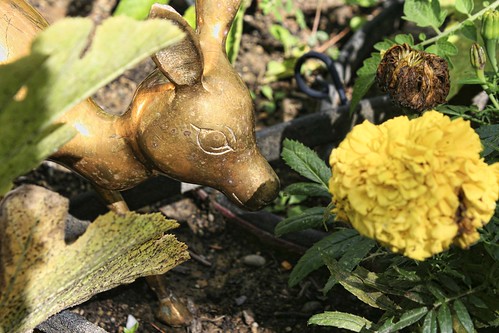 Wait. What is this? Invaders? 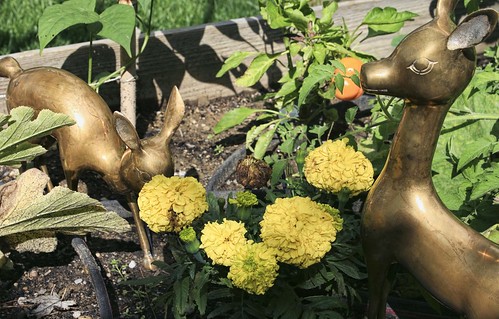 No, two (hollow) brass deer I simply had to have for the beds. I have to ask—is there a way to protect the finish, do you think? I’m not sure how well brass stands up to Midwestern springs, summers, and falls—so far as winter, they’ll come indoors, but anyone who has lived in this part of the States is well aware of the wide swings our weather is capable of taking.

I’ll tell you one thing: 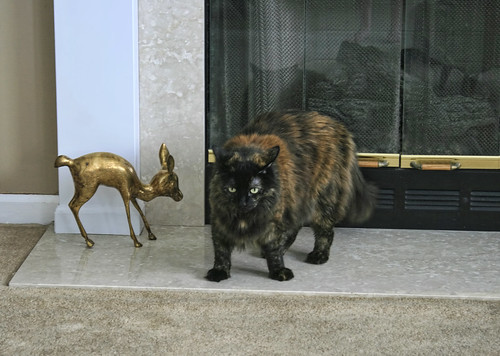 Lucy is not too sure about this new “deer in the house” stuff.

I picked up quite a few ceramic containers to tuck into the garden beds and also to use as candle holders because…why not? Two of them, the cobalt blue one and the peachy one behind it, are supposedly unmarked McCoys. I don’t particularly care if that’s the case, especially since I only paid $1 apiece, but they are attractive. That’s my main concern when hunting at such sales—Do I like it? If not, no matter how inexpensive, why bother bringing additional clutter home? But I liked these, they’re useful, and they were not marked at some mind-boggling price.

I also picked up one of those little ceramic glazed egg cartons like this one for only a quarter—it’s behind Mr. Green Rabbit—that I think will be used for succulents. (There are indeed several finds not in this post waiting for photo-worthy makeovers, as well as a bunch of books I picked up for my little year-old nephew!)

Now, I wear gloves every day, not something everyone else wants to get into. But for a tea party? 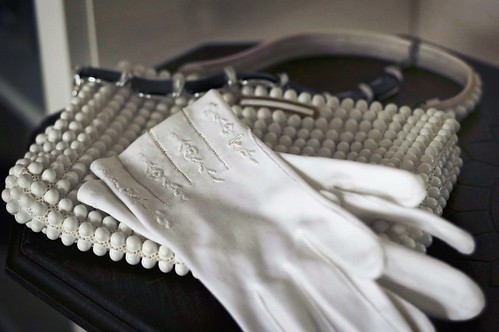 I’ve plenty of white ones, actually, but these were especially pretty. The little bead bag was only $3, and the Thermoset necklace just fifty cents! Huzzah!

What else did I scrounge up… 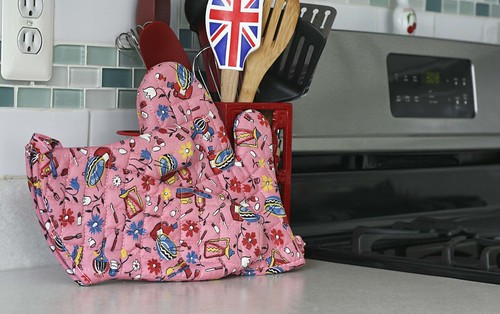 Vintage oven mitts with a darling kitchen-y print on them. The remind me of my grandmother and great-grandmother, both of whom were marvellous cooks and bakers. The same seller had piles of vintage full slips, including an ice-blue one with plenty of lace; this came home with me, too, for only a buck. Ridiculous!

A few smaller goodies—pardon the tea towel, but as you can imagine I wasn’t keen on scratching up the table. That dangerously rusty-looking thing is an Amish herb chopper, one with a fair amount of heft to it. Hubby found the ice crusher; we already have one, but this one is larger and two people crushing ice are better than one. The old gelatine mold is another thing destined for the garden: I’m going to spray-paint it a more cherry-ish red, glue white buttons onto it, stick it onto a post, and “plant” it as a sort of fairytale mushroom. 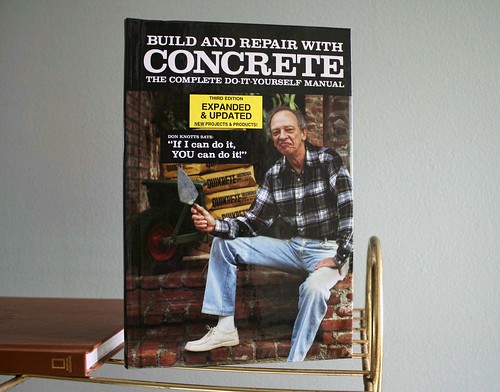 Of the several books which came home with us, this is without doubt the most amusing! (There are also useful-looking ideas in the book, but you know this cover featuring a self-assured Don Knotts sold us right away.)

What’s that he’s sitting on? Jen, didn’t you bring that home last year? Have you finally repainted it? I thought you loved that barn-find patina! 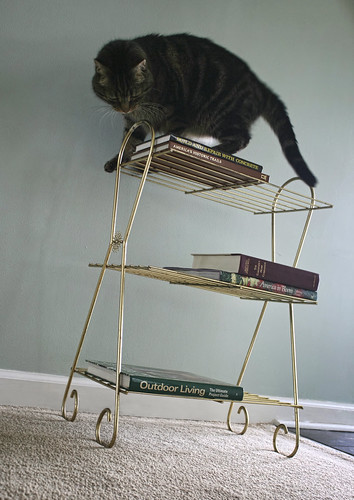 It’s another one. It was sitting there, on the side of the Lincoln Highway, looking so sad and bereft and it was marked $2 and…well, it was lonely!

So I offered the seller a dollar and here it is, back home with us. These little MCM stands have always appealed to me…now I have two!

As you can see, the finish is suspiciously immaculate; it has either been very nicely repainted or has spent decades cluttering up a very nice attic. Right now it’s in my office—my lime tree has to come in from the deck soon, so the new mid-century stand will probably end up holding the tree.

It also has these neat little snowflakes or stars on either side. Pretty touch. Buckley seems to approve, however amazed his expression. 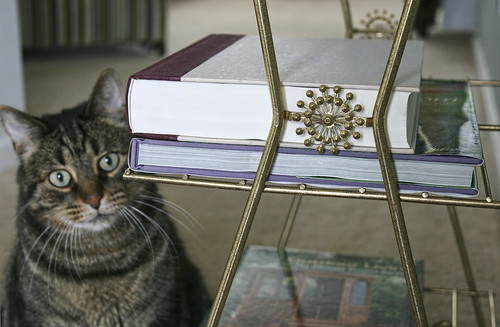 Finally, one more thing close to the heart of vintage lovers: Milk glass. 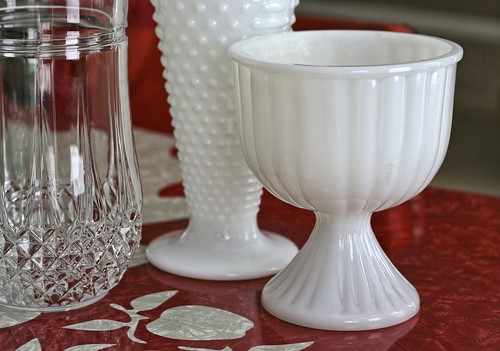 It is pretty and classic stuff that I can’t resist, as evidenced by its slow spread throughout our home. Of course, at prices like “twenty-five cents”, could you walk by? 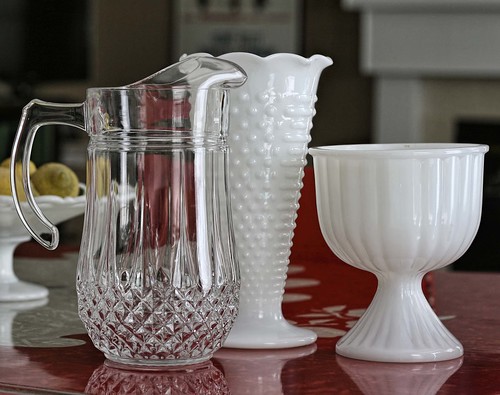 At least I restrain my buying to patterns I don’t already have. The glass pitcher came full of fake lemons I bought to put in the milk glass candy dish I’ve had for years—it sits on the kitchen table and since we are looking at other houses now, buying staging-ready things seems smart. Fake lemons it is; I’m not sure what to do with the pitcher (which was made in France—didn’t expect that) other than fill it with flowers.

So, those are most of my finds. There’s a nice wooden Arts-and-Crafts-ish plant stand that needs a covering of white spray paint; boring house things like yardwork gloves for Hubby and soaker hoses for the garden (honestly, soaker hoses are one of the best inventions in the WORLD), and the aforementioned books. After all of that running and bargaining and surviving on iced coffees and teas, though…it was good to come home, sit down with Hubby, and flip on a movie while our critters gathered round, because we were both too beat to do much else! Ben shall demonstrate: 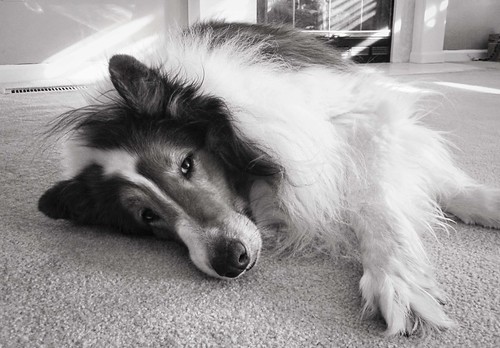 So, that’s (most of) this year’s adventure. Hitting the yard- and garage-sales is always such fun for me, no matter how tiring. We have had pretty good luck this year, even though many of those things just haven’t made it onto the blog for whatever reason (tired, mostly!). Have you headed out and found anything good this summer?