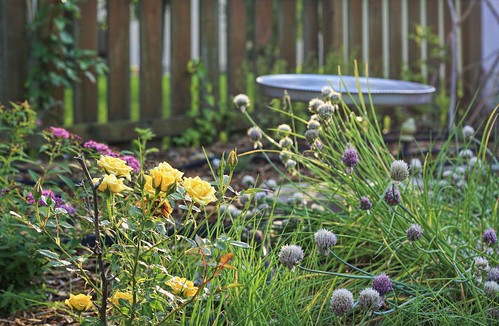 Yes, my little bug bath is crooked—the lampstand from which I built it is a bit wobblier than expected!

I’d something else planned, but who does not like a garden tour, even one vicariously taken? This post will also semi-explain last Friday’s semi-defection (I didn’t realize it was also the 13th until evening, and then, really, everything made sense). After working very hard in the garden beds Saturday, I headed out with my nifty fifty for some photographs. I was, it must be confessed, simply too tired (lazy?) to head back indoors for a wider-angle lens, for which I half-apologize, but I think the photographs turned out nicely regardless. 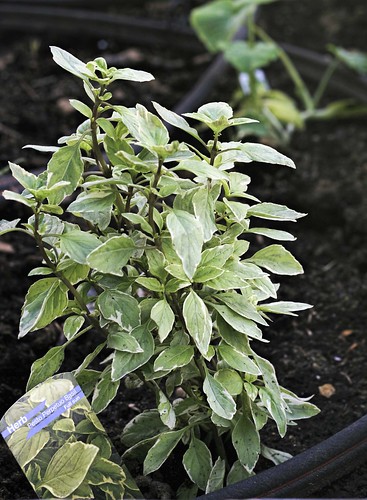 As you know, I do love gardening, and this includes veggie & fruit gardening so we have additional healthy food to eat and put up for ourselves and others. Of course, this means working alongside nature, and nature is not always very nice. In this case, a few weeks after planting the heirloom seedlings I’ve been raising since seedhood, I wandered out to give everyone a drink only to learn that during the dark of night, something had slithered through the beds and eaten the top right off every single seedling!

*sigh* No doubt fellow gardeners can understand my upset. Hubby took it a little better, saying we’d head to our local nursery to pick up replacements (it’s too late to re-start most of the lost plants from seed), and that’s exactly what we did!

Of course, heading to the nursery is (for me) sort of like sending a child to a candy store. I come home with more than planned and find myself standing around wondering where to plant those things! But getting one’s hands and knees dirty through gardening is very good for the heart and soul, and what grows so beautifully afterwards is good for the eyes and stomach, so who is complaining? (I will tell you that my white gloves didn’t come off for a moment at church on Sunday, because it took until Monday to get the dirt out from beneath my fingernails despite enthusiastic scrubbing—despite my wearing gardening gloves while working!) 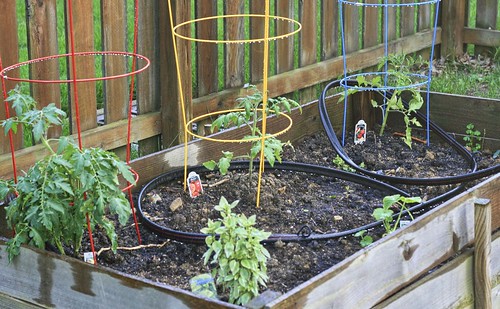 Drink time! I’m a big fan of soaker hoses—tomatoes don’t like wet leaves, anyhow. Next trip I’ll get some hay or straw with which to mulch the beds. 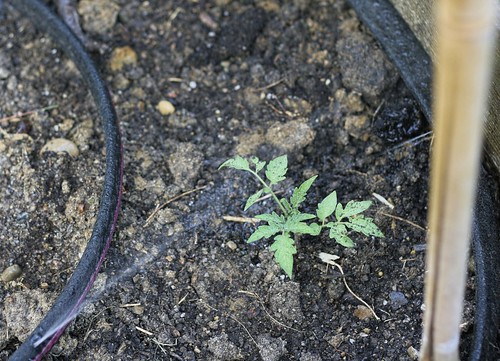 Not a pretty picture, but this survivor deserved a shot of its own!

We came home with several varieties of tomato, including one called “Mr. Stripey” that Hubby picked up, as well as “Hillbilly” and “Old German”, all heirlooms. As it happened, a volunteer from last year survived the plant massacre, and though I’ve no idea what it is (Paul Robeson? Tsungshigo? Aunt Ruby’s German Green?), the surprise tomato will be fun to watch! I’ll take it. A little melon plant, though denuded of its leaves by the invader, has survived as well, so at least it was not a complete loss.

Like many gardeners, I plant flowers with my veggies in order to attract pollinators but also because they’re just plain pretty—a garden overflowing with flowers as well as fruit can’t be beat! The ubiquitous marigold earned a spot, and I plant nasturtium as well. The latter not only have pleasing, fan-like leaves and showy blooms, they’re edible, making them doubly good in my book. 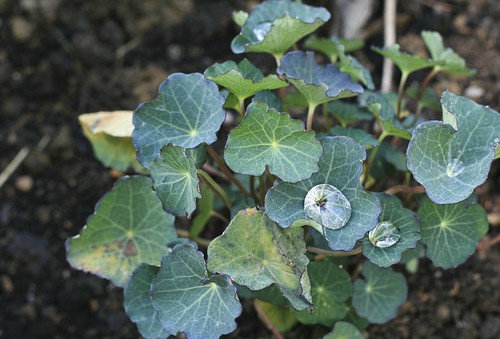 Nasturtium after a rain shower.

A few herbs came home with me as well, and aside from the basil and a pair (sage and banana mint) in containers outside the kitchen window, they were all planted in the pollinator’s garden. Not only do they tend to be handsome and wonderfully fragrant, bees love the blooms herbs throw out in the summertime. Rosemary, Corsican mint, creeping thyme, and something new to me with an irresistible fragrance—orange thyme! 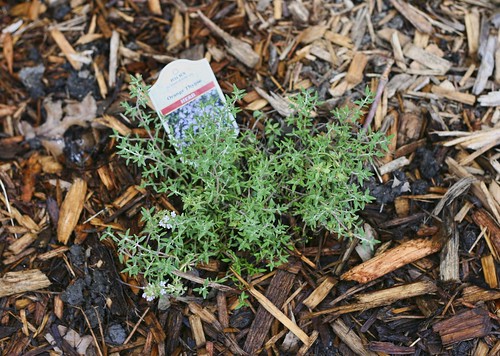 This one is going to have a more shrubby habit than its creeping cousin. It smells so, so good—if you see it about, definitely take a sniff and maybe pick it up. This one is probably going to be great on fish, in cocktails…on anything, really. (I adore citrus.) Yes, I left the tag; for the first few days at least, I need a reminder or two of what I planted where.

And as for that Corsican mint: 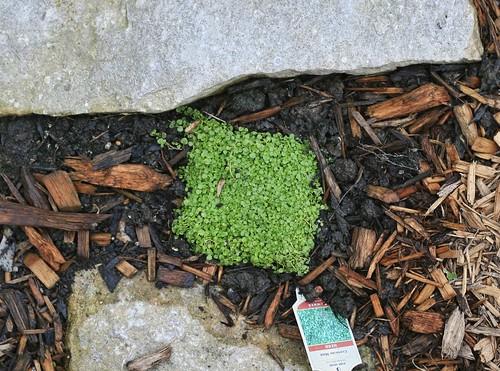 Hey. It’s HIP to be square.

Yes, a mint is likely to attempt taking over the entire garden, but I’ll be firm with it. What cracked me up is the way it stayed square after I removed it from the little pot. No doubt this will go away soon,but for now, it does make me laugh! Very odd-looking in a cottagey garden, yes? 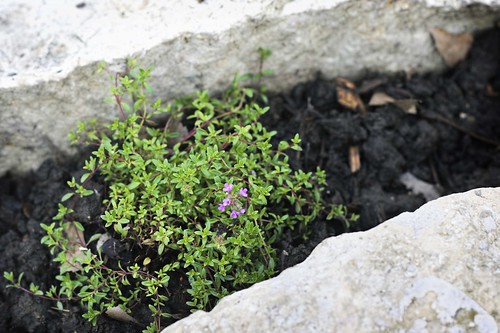 Here’s my creeping thyme, with its fairylike fuchsia-purple blooms. This and the mint, as well as some sweet alyssum, I’ve planted between the garden’s stepping-stones in the hopes that they’ll fill in the spaces between and crowd out the weeds. 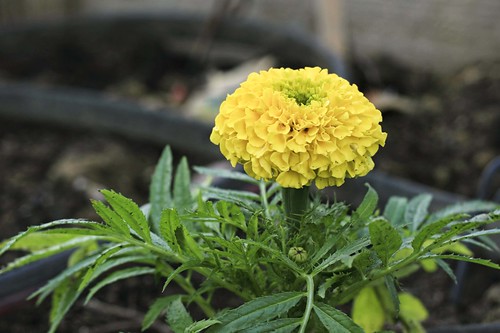 I’ve peas growing in the pollinator garden, too—they’ll add vertical interest and the purple blooms will be a little different amidst the others. 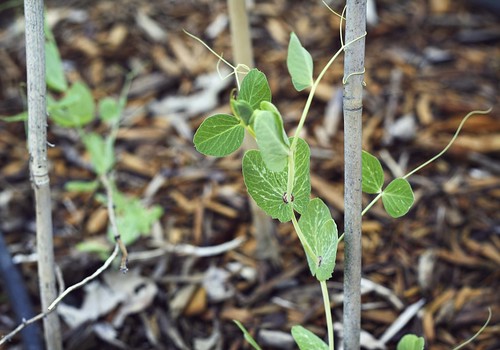 So how is your garden growing? I hope you’ve enjoyed the little tour!