Just for fun* today, I thought I’d give you all a peek at a before & after of one of my classic car photos. Of course, what you see above is the “after”—after all, it’s wise to put our best foot forward, dear hearts! It is a little dark because the car—a swoon-inducing 1958 De Soto Firedome—was parked in the shadow of a building near the end of the day.

Glamourous detail, don’t you think? The stylized head of explorer Hernando De Soto rests between the Firedome’s new-for-’58 dual headlights, every millimeter of chrome and sheet metal smoother  and more flawless than a beauty queen’s skin. 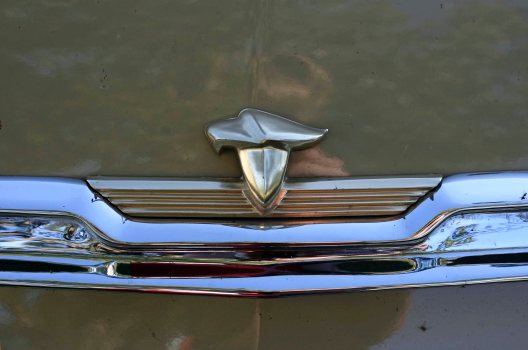 Yes, that is our before, and though it’s a bit dark (I brightened the photo a bit, as you can tell), you can still see a wonderfully thick coating of dead bugs, right down to a very large dead flying ant smashed against that beautiful chrome. And me, bumper bangs + victory rolls and all, reflecting from behind Mr. De Soto! Eeep!

Now, many times I will let a lot of things go on a classic car—to me, the details and little nicks are often part of the car’s beauty, reminding us of its age and life; you can see that I did not really do a whole lot to De Soto himself. But many other times that just will not do, not at all, and this was obviously one of those situations. Dust and dirt is one thing (for instance, in “Cool Dirt“), but dead bugs? Oh, no. That won’t do. At least not on this car.

Of course, to remove all of those specks and corpses takes a while—I probably spent around an hour cloning and spot-healing the signs of the De Soto’s trip from the car. (Yes, an hour.) Sometimes, a gentle Surface Blur will remove this sort of thing, giving the vehicle an incredible mirrorlike surface if it was not there to begin with and removing pesky dust—such as in “Caribbean Dream” in the header, “Leap”, for instance (and this is really a very minor example):

…or this photo of a Thunderbird’s hood at sunset:

…, but in this situation that wasn’t enough, and obviously that would have also blurred out the important details in the center of the photo. Of course, this sort of work gives me plenty of time to listen to lectures and that sort of thing, so I come out ahead!

I could, of course, have really hyper-brightened the photo, but again, I’m a documentarian, not an artist, and most of the time I really prefer to simply show you what I see, how I perceive it. You can look at both photos of the Fireflite and tell that not too much was done to it, really. There’s nothing wrong with that, but for the most part, tons of editing is not my style. Of course, considering the amount of time I usually find myself removing bugs, my own reflection, and the reflections of others from my vintage car photos, is it any wonder that when it looks good and clean, I’m done? My brain often is!

You can take a peek at DeSoto’s 1958 brochure, and of course there’s this Jeanne Crain ad touting De Sotos, too. I hope you’ve enjoyed this peek at how I work!

* In truth, a post about Glenbrow, also known as the Gunning House, was planned, but Monday night and all day yesterday both ended up being far more hectic than anyone could ever want—and frustrating, too (fair warning—angrily taken cellphone photo there). So it has to wait, but I couldn’t leave you with nothing, could I?

3 thoughts on “From This To That”