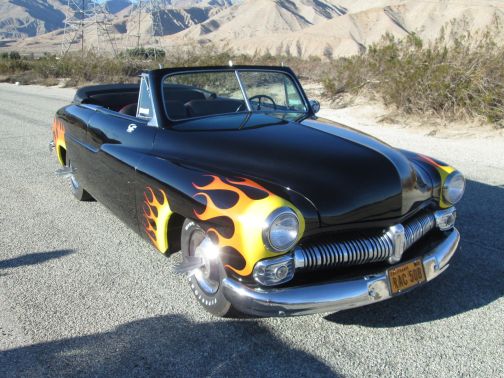 She could be yours!

Lost for 30 years and in very rough shape when she was finally found last year, one of two ’49 Mercs all dolled up for 1978’s Grease has been fully (beautifully) restored and could be parked in your garage thanks to an eBay auction ending Sunday—at least if you have the berries to pony up for her (at the moment, the highest bid is just over $125,000).

After Grease, the Mercury—which had been chopped and flamed out by Eddie Paul for the film—also turned up primed and plain in a Kurt Russell film, Used Cars, and as a purple ride in Streets Of Fire (both movies I’ve never heard of). She then simply disappeared until 2013, when she was found slathered in primer with a small block Chevy engine under the hood, no wiring, no pedals, nothing. Poor girl! 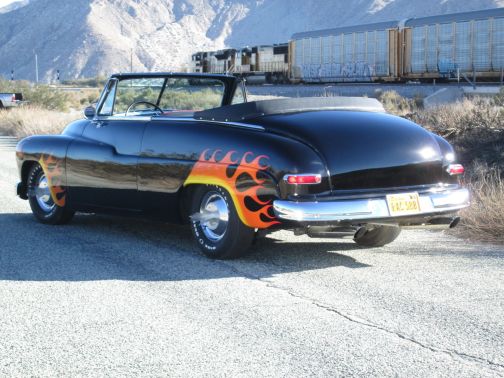 Taken to Dan Condon’s “The Shop”(RC Classics)  in Palm Desert, California, she rolled out after a complete restoration to her most famous film appearance looking drop-dead gorgeous, don’t you think? The attention to detail is wonderful—from the menacing blades on the Merc’s hubcaps to the Scorpions decal on the doors and Firestone stickers on the wing windows; the original exhaust tips and period-correct Firestone tires are on the car as well.

Best of all, Condon and his team rebuilt and dropped a ’49 255 Mercury engine into the car behind the 1950 Merc grille—along with a new manual transmission complete with overdrive. Oh, baby! (Hey, I get a little excited about horsepower. Come on, look at what I DO.)

According to the seller’s description, you aren’t just getting Hell’s Chariot; they’re including the three-foot long razors, also recreated for the car, that cut into Danny’s car during the race at the end of Grease. The car’s original bumper, complete with ding from rear-ending Greased Lightning, will come with her, too (imagine mounting that over the fireplace).

Understandably, some folks might be a little on edge when it comes to springing so much on a famous movie car (my favourite of the pair, it must be said—I’m not particularly fond of white cars) and its authenticity—but she’s the real deal, as confirmed by Eddie Paul himself, who recognized what was, as he told Yahoo! News, “rushed ‘bad workmanship’ “—but don’t blame Paul for that. Paramount tasked the man with getting 48 cars dolled up and ready to go for the film in just two weeks.

By the way, rumour has it Greased Lightning herself is still rotting somewhere on Paramount’s lot (others say she’s in various museums—three were used in the film, so it’s hard to say). If this is the case, who votes that she should be sent to The Shop for a similar refit?

Personal aside: Shocking as this is to most folks who know me and definitely those who just see my vintage look, other than the cars and clothing and other cultural touchpoints, Grease is not a favourite movie of mine—the premise is totally flipped on its ear in the end, when Sandy gives in to pressure instead of being herself (and as we all know, being herself was just fine with Danny, something he realized in the end). It took a couple of viewings for me to really get irritated over this—the CARS! the CLOTHES! the MUSIC! the DANCING! the RETRO! are all distracting to a gal like myself!—but when I did, it really did sour me on the whole flick. I still watch and enjoy, but tend to flip it off after the above drag race.

And my own drag-racing days being behind me (for now) (mostly), those stories can wait for another day.

Hey, I am a Detroit gal!